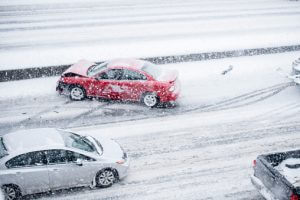 Oklahoma winters are nothing like that of the northern states. On average, Tulsa only receives 9.7 inches and Oklahoma City receives 7.8 inches of snow per year. The risk isn't necessarily how much snow our state gets but how drivers prepare themselves during inclement weather conditions.

Winter storms - such as the one that caused several crashes and five fatalities around Oklahoma City in early January - often come as a shock to drivers. Some drivers fail to give themselves more commuting time when snow, ice, and sleet cover the roads. Others simply see no danger in driving recklessly when road conditions are slick.

Failing to use caution when inclement weather strikes can result in:

What to watch out for this winter

Slick road conditions: When snow, sleet, or freezing rain strikes unexpectedly, devastating accidents can occur - especially on Oklahoma's highways. Slick road conditions can also make it difficult to navigate hills or stop at intersections. On average, winter weather conditions result in 1,300 traffic deaths and 116,800 injuries across the US each year, according to the U.S. Department of Transportation Federal Highway Administration (FHWA).

Black ice: Temperatures in Oklahoma often drop below freezing overnight. Patches of black ice can form in areas exposed to wind, such as overpasses and bridges. These patches can be difficult to see and often contribute to serious traffic accidents.

Following icy road conditions that hit the Tulsa area and caused a 21-car pile up in January, state officials are urging drivers to reduce their speed, stay 150 feet back from snow removal vehicles, and be aware of sudden changes in road conditions.

Hurt in a crash? Hire an attorney today!

If you or a loved one were involved in an auto accident because another driver failed to act responsibly during inclement weather conditions, it's important to speak to a knowledgeable and highly skilled attorney as soon as possible.

The driver who struck you may have been driving too fast for the given conditions, driving impaired, or texting behind the wheel. The experienced legal team at Lawter & Associates, PLLC can investigate and identify the negligent actions that led to your crash. Contact us today to get your claim started.