Oklahoma Tied for the 8th Lowest Seat Belt Usage Rate in the U.S. 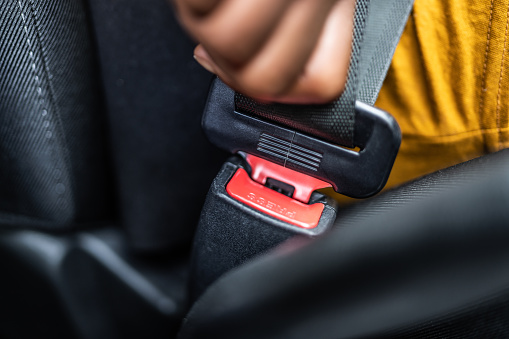 Far too many people are seriously injured and killed in car accidents every year. These crashes happen on highways, busy city streets, and back roads. A negligent driver can cause a collision that changes lives in an instant. Fortunately, drivers and passengers can help protect themselves by using seat belts and car seats for children. Unfortunately, not everybody uses them.

Here are some facts about seat belt and car seat use.

How many people are using seat belts in Oklahoma?

According to data from the National Highway Traffic Safety Administration (NHTSA), 85% of people in the state wear seat belts. That’s tied for the eighth-lowest usage rate in the United States.

Is wearing a seat belt required by state law?

All drivers and front-seat passengers aged 9 and over are required by law to wear a seat belt. It is a primary law, which means that police officers can stop and ticket someone for not wearing a seat belt. Secondary laws only allow officers to issue tickets for a seat belt violation if a driver was pulled over for another reason.

The fine for violating this law is $20. But the consequences of not wearing a seat belt could be a serious injury if you get into a car accident.

How many lives are saved by seat belts?

Nationwide, seat belts saved an estimated 14,955 lives in 2017, according to the most recent statistics. And experts believe another 2,549 lives could have been saved that year had more people been wearing seat belts.

Lives would be saved in Oklahoma, as well. From 2016 to 2019, an average of 400 people were killed in crashes on Oklahoma roads. Roughly half were not wearing seat belts.

What is the law regarding the use of car seats for children?

In Oklahoma, all children aged 7 and under must be secured in a car seat or booster seat. The fine for violating this law is $50 for a first offense.

How many lives are saved by the use of car seats?

According to statistics, car seats saved the lives of 325 children in 2017. When properly installed, car seats and booster seats can reduce the risk of fatal injury by 71% for infants and 54% for children ages 1-4.

Seat belts save lives, but reckless drivers can still cause harm

Negligent drivers cause car accidents by speeding, texting, driving recklessly, driving under the influence of alcohol or drugs, and even falling asleep at the wheel. Victims of these negligent drivers deserve financial compensation. But that can be a difficult process, and if you're not careful, you could end up losing out on the money you need and deserve.

Negligent drivers often deny doing anything wrong and won’t accept responsibility for what happened. Insurance companies try to pay victims less money by minimizing their injuries or blaming victims for what happened. Sometimes, insurance adjusters will make a "lowball" settlement offer that falls far short of covering the damages that were suffered.

That’s why you need to talk to an experienced car accident lawyer if you’ve been involved in a collision. At Lawter & Associates, PLLC, our attorneys fight for the injured in Oklahoma and know how to get results. Contact us today to schedule a free consultation. Our offices are in Oklahoma City and Tulsa.