Poll Finds Distraction a Cause of Parking Lot Accidents 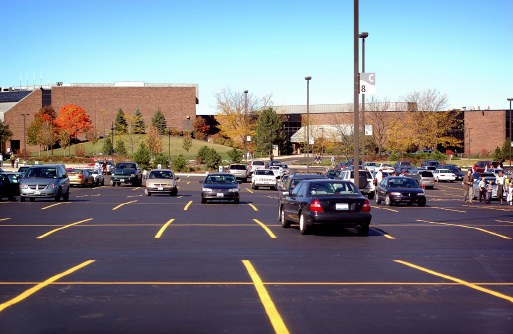 Car accidents happen all the time in Tulsa, Oklahoma City, and throughout the state. There are crashes on highways, busy city streets, and back roads. But there are also accidents in parking lots and garages – tens of thousands every year across the country. People are left seriously injured and are sometimes killed.

The problem is worse around the holidays. Beginning on Black Friday and continuing throughout the holiday season, auto insurers see an increase in claims involving parking lot accidents. The total number of crashes is likely even higher as many people choose not to report minor incidents involving no injuries.

Holidays are a busy time of year. Store parking lots and mall parking garages see a lot of activity. People are walking to and from their vehicles. Drivers are looking for a parking space or backing out of one.

What are the causes of parking lot accidents?

According to the results of a National Safety Council public opinion poll, one major factor is distracted driving.

Poll respondents were asked about their driving habits, including whether they engaged in certain behaviors while driving in parking lots. Their responses:

Some people mistakenly don’t think these behaviors are that big of a deal because they are only taking their eyes away from driving for a few seconds. But a lot can happen in a few seconds, especially in a parking lot. A pedestrian can step in front of a car. Another car can pull around the corner. And by the time the driver looks back up, it’s too late to prevent a collision.

In addition to these dangerous driving behaviors, drivers may be thinking about everything they need to get done during holiday shopping. They pay even less attention to their driving because they're focused on other things. Too often, it is others who pay the price for this distraction.

According to the NSC, 9% of pedestrian deaths that occurred in parking lots involved a driver who was backing up. Other pedestrians can suffer serious injuries, as can the drivers and passengers of other cars if there is a collision.

Experience matters when you need a car accident lawyer

Injuries from a parking lot accident can leave people with medical expenses that can seem overwhelming. Victims may not be able to work, resulting in a loss of income. If a distracted driver caused their injuries, they deserve financial compensation. But the process can be complicated.

Distracted drivers often deny doing anything wrong. And insurance companies will look for any reason to pay victims less. They may question the seriousness of someone’s injuries or argue they were somehow at fault. Or they’ll offer a settlement that falls far short of covering all the damages that were suffered, saying it’s the best that they can do.

They can do better. Lawter & Associates has been fighting for the injured in Oklahoma for decades. Our attorneys know how to investigate parking lot accidents to find evidence of distracted driving. We build strong cases and fight insurance companies for the compensation our clients deserve.

If you got hit by a car in a parking lot or were injured in a parking lot crash with another driver, contact us to schedule a free consultation. With offices in Tulsa and Oklahoma City, we proudly serve clients throughout Oklahoma.