Dangers of Multitasking Behind the Wheel: Oklahoma Attorneys Discuss 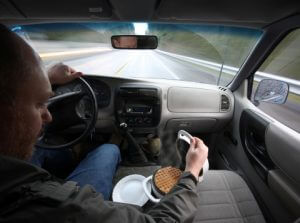 For nearly 40 years, the National Highway Traffic Safety Administration has been working to improve the safety of our roads. To that end, the NHTSA (in partnership with the National Safety Council and other organizations) created the Road To Zero Coalition in 2016. Agencies on local, state and federal levels are all working together to improve road conditions throughout the country, examine collision statistics and implement new laws, all with the goal of decreasing and hopefully eliminating auto accidents.

Their data has shown that one of the biggest road safety hazards is also one of the most preventable. According to their research, distracted driving was responsible for 3,450 fatalities and 391,000 injuries nationwide in 2016. These alarming statistics show that, while not everyone drives while distracted, we are all on the road with someone else who does.

Safe multitasking is unrealistic for most drivers

While some people believe they are skilled multitaskers who can text and drive without consequences, that couldn't be further from the truth. Professor David Sanbonmatsu is a senior author on a research study recently published by the University of Utah. He has seen the truth in the data. "What is alarming is that people who talk on cell phones while driving tend to be the people least able to multitask well. Our data suggest the people talking on cell phones while driving are people who probably shouldn't," he said.

In a study conducted by researchers at the University of Utah, the habits of 310 participants were examined. About 70 percent of them believed their ability to multitask behind the wheel was above average; however, results from the study showed otherwise. Meanwhile, the minority of people who did demonstrate some multitasking ability were also the least likely to actually multitask.

Realistically, drivers are only able to focus on one task at a time. When they take their eyes off the road to look at their cellphones, drink coffee or perform other tasks, keeping their attention on the road during that time is nearly impossible.

Get the lawyer that will fight for you

For over 40 years, Oklahoma car accident attorneys at Lawter & Associates have been helping injured people throughout the state get the care and compensation they deserve. We have seen just how devastating the aftermath of an accident can be to the people involved, as well as their families, and we want to do everything we can to help them - and that includes you.

When we take on a case, we regularly investigate the crash scene, interview witnesses as well as all parties involved in the accident, and we consult expert witnesses, all to ensure that you have the strongest possible case if you enter the courtroom. If you have been injured in a car accident in Oklahoma, contact Lawter & Associates today.