How effective are distracted driving laws? 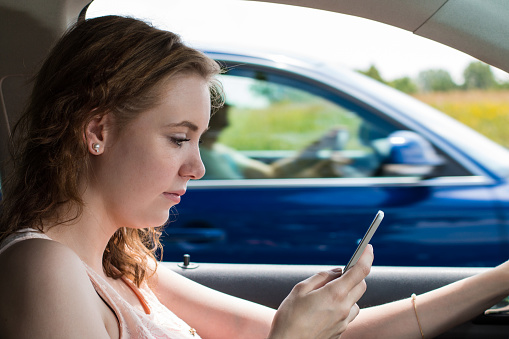 Laws attempting to stop distracted driving - one of the most avoidable types of auto accidents on the road - have been around for 20 years, but a new study is questioning their effectiveness.

Change has been slow and the laws have been difficult to enforce, as it’s hard to spot someone texting and driving while they pass by.

Over four years, the number of car crashes involving distracted drivers has fluctuated between 390,000 and 445,000, according to the federal Department of Transportation. In 2018, which has the most recent available data, there were 400,000 motor vehicle accidents involving a distracted driver.

In Oklahoma, distracted driving contributed to a spate of fatal car crashes the state experienced toward the start of 2021.

It’s not clear, said the authors of the GHSA’s “Using Electronic Devices While Driving: Legislation and Enforcement Implications,” whether banning cellphones and handheld devices is more effective at stopping distracted driving than, say, banning eating and driving. It’s also not clear whether the problem of distracted driving can be solved by legislation at all.

What are the distracted driving laws in Oklahoma?

Many states have multiple distraction-free driving laws on the books banning things like cellphones, texting, or in some cases, all handheld devices. The penalty for driving while distracted is typically a fine that increases with each subsequent offense.

Oklahoma has banned all cellphone use while driving and has a specific law against texting and driving.

For a state to have strong distracted driving laws, the GHSA said the language in the law has to be crystal clear, penalties and fines must be in line with other traffic citations, there must be high-visibility enforcement, and public education campaigns. Distracted driving laws are considered strong in Canada, New England, Georgia, Nevada, Oregon, and West Virginia.

This year, the Oklahoma Department of Transportation launched a 12-month driver-safety awareness campaign meant to reduce the number of fatal accidents in the state. The first part of the program was a crackdown on distracted driving throughout January. Other safety messages and actions will concern sharing the road, wearing seatbelts, and proper driver etiquette.

But for now, people will still have to contend with a bevy of reckless distracted drivers on the road and the crashes they cause.

Victims of distracted driving and other types of motor vehicle accidents often have a difficult time recovering their losses after a serious crash. Keep in mind that dealing with insurance agents while you're healing can be a lot to handle, especially when you consider the insurance company has a vested interest in paying you as little money as possible.

When you’re injured and your expenses are starting to pile up it can be tempting to give in and accept any settlement offer the insurance company makes you, but if you do that with an injury claim you could wind up with far less money than what you're legally allowed to recover.

If you or a loved one has been injured in a car accident, a lawyer can deal with the insurance companies for you and dig deep into your case to find witnesses, reports, and other evidence to support your claim. Lawter & Associates Attorneys at Law PLLC has been fighting for injured Oklahomans for over 40 years and knows what it takes to win tough cases in Oklahoma. Contact us today for a free consultation. We have offices conveniently located in Oklahoma City and Tulsa.